The Way of Compassion

What does love look like? That’s our question as a congregation for the season of Lent. There are many ways to answer this question, of course. This week’s answer requires guts and I pray that we have the stomach for it. This week we turn to compassion so that compassion might turn in us.

There are many places in scripture we could turn to for guidance here. I chose, perhaps, an unlikely combination of texts from Psalm 103 and Paul’s letter to Philippi, as well as other verses, as we shall see. Compassion is a constant thread woven into the fabric of our life in God.  And, yet it sometimes feels to be in short supply these days or maybe you’re experiencing compassion fatigue given what the past year has been like. This might have to do with the fact that compassion is difficult, it requires something of us, something from us, something we might not be willing to give. Compassion asks and requires much of us, but it’s also a work that we cannot do, a way we cannot walk on our own.

The church in Philippi had a special place in Paul’s heart. “I thank my God every time I remember you,” he wrote, “constantly praying with joy in every one of my prayers for all of you” (Phil. 1:3). Still, it was a community struggling with conflict and disunity. Appealing to their better angels he affirms their ability to offer encouragement, consoling with love, sharing in the communion of the Spirit, offering compassion and sympathy, expressing a way of living by being of the same mind, having the same love.  By “same mind” Paul does not mean “sameness” or uniformity of mind or thought, but a similar attitude or orientation that guides their way through the world. “Let each of you look not to your own interests, but to the interests of others. Let the same mind”—or attitude or orientation—“be in you that was in Christ Jesus…” (Phil. 2:4-5). This mind or manner or way of Christ involved moving from his place of privilege with and in God out into the life of the other, entering deep into human life in service to the will of God, in service to the love of God, in service to God’s love for humanity. Pay attention, therefore, to that movement, that pattern, that way, that paradigm because it’s at work all through scripture and it’s at work within us too. The way of compassion flows from someplace deep within God and can flow from deep within us and can orient the shape of our lives.

In David Bentley Hart’s translation of Philippians 2:1 we don’t see the word “compassion,” as we read in the NRSV, instead he translates the Greek noun splagchnon as “inward affections,” which leads us to the heart of the matter.[1] Splagchnon refers to the “bowel, intestines, internal organs, and viscera.” The verb form splagchnizomai—I love that word—means something like being “torn up in the gut.” It’s also the word used for compassion. The stomach or belly was understood as the source of emotions. And compassion is born in the gut. A rare form of the verb is found in Matthew 9, “Then Jesus went about all the cities and villages, teaching in their synagogues, and proclaiming the good news of the kingdom, and curing every disease and every sickness. When he saw the crowds, he had compassion for them, because they were harassed and helpless like sheep without a shepherd” (Matthew 9:35-36). When Jesus saw their plight, the state of their suffering it tore him up inside, it made him sick to his stomach. It was gut-wrenching. That’s where compassion originates, in the belly, in the gut.

Contemporary science is verifying what the ancients knew embedded in their language. We actually both think and feel with our stomachs through the Enteric Nervous System (ENS). Michael Gershon is professor at Columbia University, and chair of pathology and cell biology.  “The gut,” he says, “can work independently of any control by the brain in your head—it’s functioning as a second brain. It’s another independent center of integrative neural activity.”[2]  The ENS has 100 million neurons—more than the spinal cord but a lot fewer than in the brain—arrayed over an intricately folded surface area more than a hundred times greater than that of your skin.  The ENS can work all on its own, without any input from the brain, to control the movement and absorption of food throughout the intestines. “The nervous system [which includes the brain] actually started out in the gut,” says Emeran Mayer.  He’s the director of the UCLA Center for Neuro-visceral Sciences and Women’s Health as well as of the UCLA Center for Neurobiology of Stress. “Most of my patients,” he says, “have a very good understanding that there is a close connection between their emotions and their guts. But there are still very few neuroscientists who understand the complexity of this enteric nervous system and its links to the brain.”

Powerful emotional states are felt in the stomach.  Jesus’ emotional response to people in need originated in his stomach.  His interaction with what was going on around him, his response to what he saw was first registered in his gut that felt something, received something.  He couldn’t stomach what he saw. This depth of feeling made his stomach turn, and from that internal turning, he acted—and in love so changed the lives of these people, so changed the world. That’s where compassion begins to emerge, not in the head through thought but in the gut.  We don’t think our way toward compassion.  We can, of course, choose to be compassionate. But I’m not sure we think our way toward being compassionate.  Jesus didn’t say to himself, “I think I need to be compassionate toward these people because it’s the nice thing to do,” and then tell his gut to turn in knots.  Jesus’ response was not orchestrated or calculated or strategic. Compassion flows spontaneously, naturally from a deep place, in response to a felt experience in the moment. Compassion flows out from a feeling.  That’s where and how compassion is born.

Biblical Hebrew also embeds this insight in language. It’s all over the Hebrew Bible.  Sympathetic emotions find their origins in the stomach or womb. The Hebrew and Aramaic word for compassion derives from the word “womb.” The Biblical Hebrew word is riham, from rehem, meaning “mother,” or “womb.”  “The Biblical conception of compassion is the feeling of the parent for the child.”[3] The deep bond between parent and child is understood as compassion and that feeling can be conveyed from one person to another. It’s the same word used to describe God’s feelings and response to human pain and suffering. God is compassionate especially to those that suffer, toward the poor, the widow, the most vulnerable. The psalms declare this again and again, especially Psalm 103, as a parent has compassion for a child, so God has compassion toward us (Psalm 103:13), “For God knows how we were made; God remembers that we are dust” (Psalm 10:13-14). As a mother cares for the new life growing in her womb, so, too, God reaches out with compassion toward us. Or consider the Parable of the Prodigal Son in Luke 15. When the father sees the wayward son on shuffling his way home in shame, even when he was “still far off” the text says, the father “was filled with compassion, he ran and put his arms around him and kissed him” (Luke 15:20). It’s the turning point in the parable as the father’s stomach turns to see the sorry state of his son. Compassion is embodied in us and through us whenever you and I simply care for God’s children, young and old alike, friend or stranger or enemy, whoever crosses your path in need of a healing touch.

The English word compassion, means “with passion,” and passion means “to suffer.”  When we suffer, we feel. That moment when Jesus encountered human desperation, seeing his people harassed and helpless was a form of suffering, was it not?  It’s compassion that led Jesus to a cross. Following the way of Christ, Paul asked nothing less from the church in Philippi, that is, mutual consolation, shared inward feelings of mutual suffering that bind people together, through their sufferings, and binds a people to God. To enter into the life of another human being is to suffer and sometimes, if we’re honest, we don’t want to feel that deeply, we resist it. But suffering of some kind is required for compassion.  Compassion is a kind of ache. It hurts. And I wonder, are we less compassionate than we could be because we’re unwilling to suffer, don’t want to feel that deeply, ache that deeply, because we don’t want to be changed by the suffering of another human being?

Now, I’m not suggesting that we glory in our sufferings so that we can become more compassionate. That’s not what this is about. Instead, to suffer means “to undergo.”  It often has negative connotations, of course, but we can suffer joy or love as much as suffer pain or sorrow or loss. To suffer is to undergo a felt experience, one that touches us deeply, which affects us, infects us, washes over us, and maybe even overwhelms us; it stirs us, excites us, disturbs us, and moves us.  The feelings come upon us.  We might resist them, maybe fight against them.  There are times when we want to deny or resist or contain these feelings; perhaps we’re afraid where they might take us.  Perhaps we will be overcome, perhaps we will go under as we undergo a feeling, whether it be joy or sadness.  To suffer means we allow the feeling to flow over and under and through us, be moved by it, be touched by it. This is the way Jesus encounters us, when Jesus looks at our lives. And it’s how we can encounter our neighbors, as well as our enemies, when we enter into their suffering, even take their suffering, receive it into us, and try, through the grace of God, to have some understanding of their pain and maybe do something to help alleviate it. And if we can’t alleviate it at least we can try to understand it.

What does love look like? What does your gut say? Where is your stomach turning?  Where is it getting torn up, troubled or disturbed by what it sees?  Yes, I know this is difficult. It’s demanding. It’s heavy, I know. We are dealing with compassion fatigue. There are some who can’t take in anymore. But we also know there are people who refuse to take in the suffering of God’s people, let alone acknowledge it. That’s why I’m convinced all the more that the world needs us, needs the church—you and me—to be God’s compassionate people. God needs you, the world needs you—you, right where you are—to do your part, to do the work, and follow the way of compassion. And remember, we don’t do this alone. We’re not being asked to take on all the suffering of the world or alleviate all the suffering of the world, we’re not called to save anyone or anything. This is not our task. But we can be moved by it all.  We can allow the suffering of the world to touch us.  And when we do, we might be surprised that we’re able to stomach more than we think we can.

What if the Spirit, in love, is moving us in the direction of what we cannot stomach but maybe need to stomach, what if the Spirit is inviting us to listen to our guts, to feel deeply, to be touched and influenced by the suffering of God’s children, so that from that tender, hurting place we can become more authentically human and from that tender, hurting place discern what God is calling us to do? Then, this, too, is what love looks like. 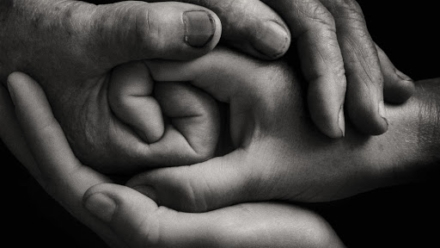