Joseph has been thrown into a conflict of cosmic proportions. Mary, his fiancé, is pregnant, and Joseph knows he’s not the father. They lived apart; they were never intimate. Matthew tells us that Mary “was found to be with child from the Holy Spirit” (Matthew 1:18). If we stay in Matthew’s account and try to forget Luke’s version with the annunciation given to Mary (Lk. 1:26-38), we don’t know how much Mary knew about this baby growing within her. Did she know it was from the Holy Spirit?  That’s what Matthew tells us, but did she know?  And, if she did know, did she tell Joseph?  And, if she did, did he believe her?  Did Joseph believe that God was somehow involved in this scandal?

And that’s what it was, a scandal. Shameful. Humiliating. Disgraceful. In the eyes of the Mosaic law, both Joseph and Mary are wrong. Matthew says that Mary was engaged or betrothed to Joseph, so not technically married. But we need to know that betrothal or engagement was a formal contract of union by which both parties were bound.  Rabbinical law declared that the betrothal was equivalent to an actual marriage and only to be dissolved by a formal divorce. Marriages were arranged.  The betrothal of a young girl under the age of twelve was the prerogative of the father, and the girl had no say in the matter. Around twelve, the betrothed moved from under her father’s authority to her future husband. This means that Mary was close to twelve years old when she became pregnant.  Betrothal was as binding as marriage itself.

And so, we can appreciate Joseph’s dilemma—and Mary’s. An engagement could be nullified one of two ways, through a public legal proceeding with formal charges filed against her for adultery, and if proven, she and the father of her child would be condemned to death by stoning (Deut. 22:13-30).  The other way was private, by issuing a document of repudiation. Either way, Mary’s life would have been over, and her reputation ruined.  There was one other option, Joseph could stay engaged and raise the child as his own, but that would mean a different life for them both.

What should Joseph do?  Matthew tells us that Joseph was a “righteous man and unwilling to expose her to public disgrace,” and so after a time of inner wrestling, he “planned to dismiss her quietly” (1:19). “Righteous” here doesn’t mean that Joseph was a nice guy or good man or a gentleman. “Righteous” gives us a clue about the kind of man Joseph was and about the enormous ethical dilemma he is caught in. “Righteous” here means that he is “scrupulous about keeping the commandments of God, the Old Testament law, striving to live his life in harmony with the will of God, to follow to the letter all of the provisions of the Mosaic law.”[1] He’s a traditionalist; he was a religiously conservative man.  And he’s caught in a crisis of conscience.

What should he do?  He can’t stay in the relationship.  The prospect of bearing her shame and raising this child that wasn’t his is not an option for Joseph.  He knows what the law requires; there’s no ambiguity. Being at least compassionate, he chooses the second option, dismissing her quietly instead of the public trial and possible death sentence.[2] But the law is the law, and he is righteous. Can you feel his dilemma?

And, then, just at the moment he resolved to dismiss her, perhaps the night before he intended to carry out his plan, he has a dream that throws him deeper into conflict. And what a dream it is. Joseph’s conscious waking ego, his “I,” that is, his thoughts, will, feelings, particularly fear, came up with a plan that was rational, practical, and religiously proper. However, his deeper self, the depths of his soul close to the will of the Holy, revealed that something else needed to happen, which from the perspective of a traditionalist like Joseph, must have felt scandalous, shocking, unsettling, and scary.

The angel, the Holy, spoke to Joseph in a dream.  Sometimes that’s the only place where God can get our attention.  When the ego, our waking consciousness with all its fine-tuned defenses, gives up its control and we sleep, the unconscious, the depths of our psyche, the depth of the soul upon which our lives are built, comes alive and begins to speak through words and images, feelings, and experiences.  Not all our dreams are holy, of course—but sometimes they are.  Sometimes the Holy speaks so clearly and decisively through a dream that when we awake there’s no doubt what must be done.  In this dream, Joseph confronts a power greater than his ego. That’s what makes this dream so remarkable.

As you probably know, I spend a lot of time working with dreams. This one beautifully illustrates how dreams work.  Dreams often compensate for our waking life. They mirror back to us what is missing or what the ego can’t or won’t or needs to see in our waking life. And sometimes, they are prospective; they tell us where we need to go and what we should do. They lead us somewhere for our welfare, and often for the wider good of the world.[3]

And, so, what does the Holy dream through Joseph?  The angel addresses him by name—“Joseph, son of David”—and roots Joseph deep in his past, reminding him of his identity as a descendant of David, the shepherd boy, and his surprising call to be Israel’s first king (1 Samuel 9-16).

“When Joseph awoke from sleep,” we’re told, “he did as the angel of the Lord commanded him” and defying the law, “he took her as his wife, …and he named him Jesus” (Mt. 1:24-25). Yeshua, meaning “Yahweh saves.”  Yahweh saves by being with us.  Emmanuel. God is with us.  Joseph aligns his life with Mary’s and with the life of the child, and with the will of God. When Joseph awoke, he knew what he had to do. He has to accept the scandal.

Can you imagine him waking from such a dream?  Joseph learned “that being truly righteous does not mean looking up a rule in a book and then doing the ‘right thing’; it means wrestling with the complexities of a problem, listening to the voice of God, and then doing God’s thing.”[4] He discovers that being righteous is not about being pure or perfect or trying to behave like a good little boy or girl, trying to make and keep God happy, but, as Joseph’s son taught us, being righteous is joining one’s heart with the heart of God and being about God’s redemptive work in the world. Deciding from his heart, Joseph knows what he must do, no matter the cost to him, his reputation, ego, or pride. Joseph understands now what it means to be a son of David, and he accepts his task, the work of his life.

“And he took his wife”, Matthew tells us. He didn’t dismiss her. Joseph obeyed. He could have ignored the dream, although that would have been tough given the power of this dream, and that decision would have thrown him into a greater crisis of conscience. Instead, Joseph yields to a force and purpose and love greater than himself. He accepts his destiny, the burden of his call, the vocation of his life, to help God “father” into the world the Christ, the savior of all people. And Joseph—Joseph—names him Jesus” (Mt. 1:25). All because of a dream.

So thanks be to God for Joseph and all the Josephs in the world and the “Joseph” in you and me. Confronted by God’s scandalous ways of loving and saving the world, Joseph discovered something true for each of us. He discovered in the dream that, deep down, our lives are not our own. Your life doesn’t belong to you to do as you wish. We have been entrusted with life so that our lives can help “father” God’s hope into the world—and “mother” that love, bear that love into the world. Our lives—as small and seemingly insignificant as they are or seem to be within the immensity of the cosmos—are embedded in a much larger story or drama of God’s mission of redemption and reconciliation. We are each essential characters in God’s ongoing nativity play. We are part of this story that’s still being told, waiting, advent-ing for that time when God will make all things new.

As we wait, Joseph shows us there comes a time when we have to give up our plans for our lives and our personal agendas, face our fears, swallow our pride, bear the shame and humiliation and scandal, confess our arrogance and ignorance, and question everything we thought we ever knew about God and what God expects from us—to listen to the voice of the Ages speaking in the depths of the soul. Now is the time to prepare the way for Emmanuel, to consent to the scandalous summons of the Living God—to yield and bow and ultimately kneel before the mystery of the Incarnation. God is with us. 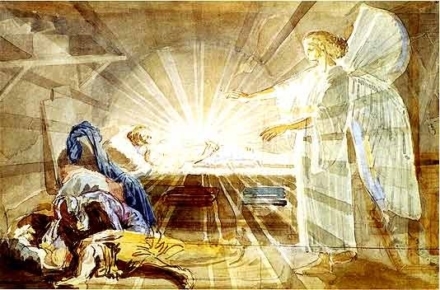 [3] For more on dreams, particularly from a Jungian perspective, I highly recommend Robert Bosnak’s, A Little Course in Dreams (Shambhala, 1998).