For God So Loved

John 3:16. We probably know the verse by heart. We’ve see it plastered on billboards and bumper stickers and emblazoned on banners at sporting events. “For God so loved the world that God gave his only Son, so that everyone who believes in him may not perish but have eternal life.”  The reformer Martin Luther (1483-1546) said this verse was “the gospel in miniature.” It’s also a verse that has come to carry a lot of baggage and many associations, including negative ones. What if one does not “believe” in him? What then? While the text might be proclaiming love, it sounds as if this love is conditional.

Now, there are many places we could start in this series. But it’s probably best to start at the beginning, the beginning of everything, which is God’s love. There are many texts that tell us something of God’s love, but I thought John 3 was a good place to start, especially Jesus’ words to Nicodemus. There’s a lot going on in these verses and we can’t unpack everything. But I want to focus upon one idea, one word found in two verses, vss. 16 and 17. It’s the word: world.  For God so loved the world.  When we hear the English word “world” we probably think of planet or creation, we think of everyone and everything in the world. The Greek reads the kosmos, from which we get the word “cosmopolitan,” and so “world” is an adequate translation. However “world” is much too small a translation of what it means in Greek, which is far more cosmic in nature. English can’t quite capture the meaning of the Greek word kosmos.

In Greek philosophy as well as in early Christian theology kosmos meant more than the created world. For John, “the world,” the kosmos is not synonymous with God’s creation.  Instead, the “world” refers to a fallen realm or force [within creation] that exists in estrangement from God and is organized in opposition to God’s purposes.  The kosmos refers to a everything within creation that is at odds with God, everything that is at cross purposes with God’s intent for the liberation, salvation, redemption of God’s people, it’s everything in our lives that struggles against God’s vision of justice and love and forgiveness, everything that seeks to destroy us or dehumanize us or limit our freedom in Christ. And because God’s children are being harmed and hindered by the kosmos, destroyed and dehumanized by the kosmos, thus causing God’s people to sin or become separated or alienated from God, the kosmos has to be overcome, disempowered, redeemed, which means to be called back. I’m grateful that David Bentley Hart’s recent translation of the New Testament reads cosmos instead of “world” to point to what is going on here in Greek.[1]

All of this is behind John’s use of the word kosmos as he strives to give expression to the height and depth and breadth of his experience of Jesus Christ, God’s “Word enfleshed” (John 1:14). God’s inexorable love is determined to save and make whole and redeem creation.

Can you hear the profundity, then, of John 3:16, as well 3:17? They need to be held together. I would say that John 3:16 and 17, taken together, is the “gospel in miniature.” Can you hear, can you feel the earth-shaking claim that John is making when we consider all that is behind the word “world”?  “For God so loved the kosmos that he gave his Son….” Consider this:  God so loved the kosmos, meaning God loved all that was and is against God, God loves the enemy (Matthew 5:44-45), everything that strives to undo creation.  The power of this love, this grace, comes through even stronger in verse 17, “Indeed, God did not send the Son into the kosmos to condemn the kosmos,”—then why was he sent?— “in order that the kosmos”—again, all that which is against God!—“…in order that the kosmos might be saved through him.”

This is what Jesus came to do for you and me and for the kosmos. On the cross Jesus took on the kosmos, both in the sense of bearing, enduring the kosmos, as well as fighting, battling, overcoming it through love. Later in John’s Gospel we hear, the ministry of Jesus is stated so beautifully in chapter 13, “Having loved his own who were in the world (kosmos), he loved them to the end (13:1b).” Having loved all those bound by the destructive forces of the kosmos, seeing the pain inflicted upon God’s people, he loved them to the end.

This is what John invites us to “believe.” Although it’s really about more than “belief” or intellectual assent to something.  Jesus hopes for belief from us, yes, but more Jesus wants us to trust. That’s really what’s behind the references to “belief.”  When we trust and rest and dwell in the fact that God is loving the kosmos in order to redeem it and therefore free us and save us and liberate us to love, then everything changes within us and around us in the world.  Christ is the “light” who has come in the world (kosmos, John 3:19) and we are invited to see his light even in the dark, to be drawn to his light and live from his light (John 3:20).  For God so loved and loves the kosmos. And we’re invited to believe, yes, but more, to trust, to rest in this knowledge, to participate and share in this love, the love of God being poured out into the world. God is loving the kosmos whether the kosmos knows it or not. God is loving the kosmos whether the kosmos likes it or not, that’s why there’s nothing conditional about this kind of love, a love that does not condemn but works to redeem in order to give birth to something knew.

This is what Jesus is getting at when he says to Nicodemus that it’s possible for one to be born again or born from above (John 3:4). It is possible for us to be born of water and Spirit (John 3:5). God so loved the kosmos and gave the Son so that something new can be birthed in the kosmos and birthed in you and me.  Something new can be born in you, born through you. So we can rest in this. Trust this. This is what “belief” is for John, a trust. We can fall into this. Surrender to it. Yield to it.

Open yourself up to the Spirit renewing you, redeeming you. Open yourself up to the Spirit saving you from the kosmos and saving you for love—God’s love—enacted in creation, through death and life. The light of God’s love in Christ is light to the world that no darkness can ever extinguish (John 1:4-5), a light that shines even in our darkness. His love is the light of the world, a love that grows in intensity and shines brightest in the places of greatest need and human suffering. 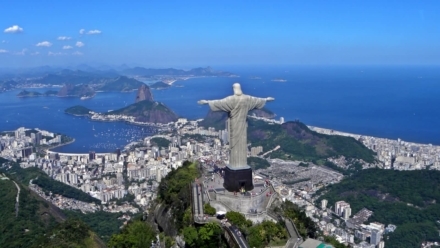