Last Sunday, we looked at the first resurrection sighting, Mary Magdalene mistaking Jesus for the gardener.[1] Then, on “the evening on that day,” John tells us, “the first day of the week” (Jn. 20:19), which we call Sunday, we find the disciples behind locked doors. They are back in the house where they gathered before Jesus’ death, likely the site of their last supper together. John tells us that “the doors of the house where the disciples had met were locked for fear of the Jews, Jesus came and stood among them and said, ‘Peace be with you’” (Jn. 20:19).

This, too, is a remarkable scene: Jesus’ astonishing exchange with the disciples locked away in fear. “The doors of the house…were locked for fear.” It’s such an evocative phrase and image. And I’m intentionally phrasing it this way, omitting the object of their fear—“the Jews”—for two reasons.

First, unfortunately, the reference to “the Jews” in John’s Gospel has been used to justify the persecution of the Jewish people. John’s attitude toward “the Jews” of Jesus’ time has been used to support Christian pogroms against all Jews across the centuries. It is incumbent upon us to know our history, to understand the Church’s complicity in propagating racism.[2]  John’s use of the designation “the Jews” throughout the Gospel—and it’s found throughout the Gospel, particularly in his account of Jesus’ final week. It’s painful for us to hear this language after the Shoah (Holocaust). When John said “the Jews,” it was a code word for the Jewish religious establishment, that is, the religious leaders; he’s not talking about everyone Jewish (including John and Jesus, who were both Jewish).

The second reason for omitting reference to “the Jews” allows us, we who are not necessarily fearful of “the Jews,” to access the depth of meaning of a text like this. While we might not be afraid of “the Jews,” we are certainly people who know what it’s like to live with fear. “The doors of the house…were locked for fear.”

The disciples are hiding, scared for their lives. Why? Fearful of the religious authorities, but there are also other scenarios. They’re afraid of being persecuted for following the “criminal” Jesus. They are marked men. Perhaps they’re fearful of retaliation. If Jesus is not alive, they will be attacked for being associated with the blasphemer who claimed to be God’s Son, stirring up the city and annoying the Roman authorities. We can imagine them trying to find a way to get out of Jerusalem, to flee to safety in Galilee.

No doubt news was spreading about what happened at the garden tomb. But why would this invoke fear?  Think about it.  If it’s true, if resurrection is true, then it’s kind of difficult to return to life as “normal” after that. Resurrection changes everything. If Jesus is alive, then their commitment to him would need to be even stronger than it was when he was alive (which wasn’t all that strong).  And so, they can’t just set aside the whole experience with Jesus as a kind of bad dream and then go back to life as normal; they can’t go home again. There’s no going back to “normal.” If Jesus is alive, then this really does change everything. And in the face of such radical change, it is easy to imagine the disciples huddled together in fear behind locked doors—that’s probably where I would have been.

We can’t blame them for being fearful. On the one hand, fear was probably the appropriate and natural reaction to all they experienced. If they weren’t afraid, they probably weren’t paying attention to what was happening around them that weekend in Jerusalem. Fear is the normal, rational response when one feels threatened, attacked, unsure, or confused.

Fear is a powerful emotion with both positive and negative dimensions. There’s a lot about fear that is good. There are rational fears that serve an evolutionary function, which has allowed humans to survive for millennia. Fear can be a good defense mechanism against all kinds of predators. There’s something primal about the way fear protects us. When we’re fearful, we respond with whatever it takes to keep us safe; it motivates us toward security. Feeling safe and secure are good things, obviously. It’s impossible to live and thrive without security, without a feeling of being safe. Sometimes fear is a perfectly rational response—but if we get stuck there, stuck in the fear, that becomes a source of considerable concern. That’s when fear can become the prison of the heart.

Fear—throughout scripture—never has the final word in any scenario. It’s never the permanent state for God’s children. We are not called to live in fear but in freedom, including freedom from fear. Whenever the disciples are afraid, the voice of the angels or the voice of Jesus himself—the voice of God—is always consistent: “Fear not.” “Do not be afraid.” The good news of the kingdom is “Fear not.” Don’t live your lives in fear. Instead, live your lives with love. And the New Testament is the only text I know that teaches the opposite of love is not hate but fear –if you know another, please tell me. For we read in 1 John 4:18, “There is no fear in love, but perfect love casts out fear.” When we’re bound by fear, we hate, attack, persecute, destroy, and murder and kill.

Years ago, a wise ruling elder said to me, “Ken, we act either in love or fear.” We have two choices. We can choose love or fear.  I was a little suspicious at first. It sounded overly simplistic, but I think it’s true for the most part. Consider the countless choices you make on any day or week or over a lifetime—were they done in fear or love? Think of the significant decisions you have made in your life or decisions that need to be made. Love or fear? Which one is in the driver’s seat?

Children are growing up and maturing in a world overwhelmed by the presence of fear. The world can be a scary place for a child. It’s probably always been the case. But earlier generations were raised in communities that shared a common religious perspective, one that provided considerable resources for children. There was a time when family and community, particularly religious communities, helped provide a secure, safe place for growth.  This is completely missing for many today.

God doesn’t want our lives governed by fear. Again, fear might have an evolutionary function that allows us to survive; however, theologically and psychologically speaking, we know that fear can suck the life out of us and hinder our ability to thrive. When fear generates an obsession with safety and security—when we’re always living behind locked doors—we cut ourselves off from life itself. The psychiatrist Carl G. Jung (1875-1961) observed that “negation of the life force by fear” is “the spirit of evil.” I think he’s correct.[3]

It’s precisely in such a context that we hear Jesus’ words to his disciples. God will not allow fear to have the last word. In fear, the disciples try to hide from a world that resists all the implications of the life-changing, liberating power of resurrection. But fear can’t hinder the new life Jesus extends to us! Resurrection life acknowledges the fear but does not allow it to divert or destroy what God is doing through Jesus and through us.

I love how the resurrected Jesus appears within the locked room and stands among them; he stands within the confines of their fear; he appears and stands in the place of their greatest fear and says, “Peace be with you.” Even locked doors can’t keep him out. Christ’s boldness overcomes every barrier we try to erect in fear. We’re not meant to live behind locked doors.

And, did you notice how these verses contain John’s version of Pentecost? There are no “tongues of fire,” as we find in Acts. What we have here is Jesus saying, “Peace be with you. As the Father has sent me, so I send you.”  Sent to be agents of peace, agents of his presence, offering assurance in every other fearful place we find in the world. Jesus breathed on them and said, “Receive the Holy Spirit” (Jn. 20:22).

In that place where you hide, locked away in fear, Jesus still says,

In all that instills fear in you, Jesus still says,

In the prison of the heart bound by fear, Jesus still says,

In the lives of people, we know who are overwhelmed by fear,

the Lord sends us to say in his name,

In a world ensnared by fear, the Lord sends the Church out to offer a different voice to the world, saying, “Peace be with you.”

Every place where we are tempted to act in fear over love, may we remember the words of the Risen Lord
who said and continues to say to us: 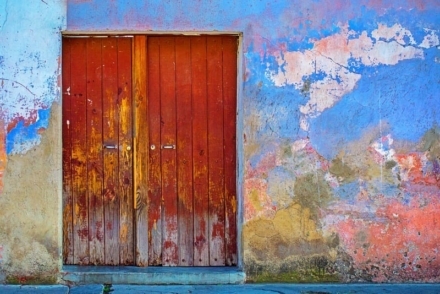 [2]The Nazis, for example, did not invent the concept of the Jewish ghetto. The Nazis got the idea from Christians. The site of the first Jewish ghetto was Venice, Italy, in 1516.  It was the only place Jews were allowed to live in the city.  There was also a ghetto in Rome (the Ghetto di Roma), built in 1555, surrounded by walls, with three gates and a Vatican guard that made sure no Jew left the area after dark. The Papal bull Cum nimis absurdum, promulgated by Pope Paul IV in 1555, segregated the Jews, who had lived freely in Rome since antiquity, and subjected them to various restrictions on their personal freedoms such as limits to allowed professions and compulsory hearing of Catholic sermons on the Jewish Shabbat