Now and again, I hear people outside the church say that the life of Jesus doesn’t really resonate with their experience because he was always “nice,” kind, and loving.  He was not fully human, they say, because he never got angry, and therefore they can’t relate to him. All they need to do is read this text from Luke or read later in Luke where Jesus cleanses the temple and drives out the moneychangers. In John’s Gospel, Jesus even makes a whip from cords and drives out the moneychangers (Jn. 2:15).

Now and again, I hear people outside the church make comments about Christians who speak out or boldly denounce with righteous anger a particular injustice in the world. In their view, these Christians don’t come across as nice or kind, or loving.  “I thought Christians are supposed to be kind and loving. Peacemakers,” they say. These folks probably haven’t read the Gospels either.

“I came to bring fire to the earth,” Jesus said, “and how I wish it were already kindled!” (Lk. 12:49). Fire to the earth. Destruction. A baptism of fire. A baptism of destruction. This, too, is part of the burden of his call, stressing him out. “Do you think I have come to bring peace to the earth? No, I tell you, but rather division!” (Lk. 12:51). This is not the image of Jesus meek and mild. He doesn’t sound like a good shepherd. Maybe he was just having a bad day, or maybe he was just in a foul mood.

In our age, full of division, in a society like ours becoming increasingly divided over so many issues, including religious and theological questions, it’s difficult to hear good news in this text.  This doesn’t sound like the gospel, does it? “Five in one household will be divided, three against two and two against three” (Lk. 12:52). These days, I know many families that are divided over politics, and I’m sure you do too—well, I do know because you’ve told me. However, the divisions Jesus is talking about here are not the result of people not getting along or the lack of tolerance or civility or disagreement over personal opinions of what might (or might not) be true.

In the reading from the Psalms and Luke’s Gospel, we learn that there are times when judgment is in order, times when we are called to judge because it’s the right and good thing to do, because it’s what love desires and demands.  Judgment, though, makes us uneasy. Nobody likes to be judged. Standing before a judge is unsettling. People who are always judging or judgmental are not a lot of fun to be around. Not surprisingly, the image of God as judge is not one that we’re drawn toward. Although, there are, sadly, plenty of people who view God primarily as a judge. Other have become disgusted by religion because all they see is judgment. God as a judge, a male judge, reeks of toxic masculinity and abusive power dynamics.  Sometimes, either because we don’t like to be judged (and, again, who does?) or we’re trying to recover from authoritarian parents who were full of judgment and short on love, we steer away from wanting to appear judgmental. There are certainly plenty of Christians who are too judgmental and need a good dose of compassion and grace. There are also many Christians who, fearful of coming across as judgmental, and wanting to be full of love and mercy, refrain from any kind of judgment on anything or anyone, thus becoming passive, indifferent, and silent in the face of wrong and injustice.

As I shared last week, theologian Karl Barth (1886-1968) insisted that mercy and judgment should be held in tension. In our society, we tend to want to separate them, either mercy or judgement. Barth understood mercy and judgement are the opposite sides of the same coin, as it were, and need to be held in tension. God’s Yes includes God’s No; God’s No is also God’s Yes to us. Therefore, there is judgment in God, but God’s judgment and anger are never an end in themselves, as they are for many human beings. (This can’t be stressed enough!) The intent of God’s judgment is not to destroy or annihilate.  If we have discovered in Christ that “God is love” (1 John 4:16b), we need to ask: what does judgment from a loving God look like? God’s judgment is upon the things that hinder God’s will for creation and hamper human flourishing. It is a judgment that judges sin (not people) to clear away everything that impedes God’s desire for the world. God’s ultimate desire is to redeem, restore, heal, and make whole.  God’s judgment is in service to restorative justice.  Yes, there’s plenty of judgment in Scripture, but judgment is never the last word. It is mercy. And in order to see mercy, in order to know what mercy looks like, we have to judge, we have to choose.

It seems to me that this is why Jesus is so angry with his disciples because sometimes we have difficulty choosing, discerning, and judging what is going on. Jesus knows how much has been entrusted to us. The Gospel reading began with Luke 12:49, but in verse 48, we have these words from Jesus, “From everyone to whom much has been given, much will be required; and from the one to whom much has been entrusted, even more be demanded” (Lk. 12:48). Much has been given to us with the coming of God’s kin-dom or realm of kingdom, and much is required of us. And often, in order to see and experience the coming of God’s kin-dom—which is God’s good pleasure to give (Lk. 12:32)—we have to move through judgment. Judgment guided by love.  In love, we must be able to judge what is right and what is wrong. We must judge what is of God and what is not. We have to judge, we have to decide whether we are on the side of the forces that yield life or are we on the side that pushes for destruction and annihilation. We have to judge, decide, discern whether we are open to the reign of God breaking into our lives, on the side of what God wants for God’s people and this world or are we against it—or maybe passively doing nothing and standing in God’s way. We have to judge our hearts, sift and discern, test and see. As the old hymn put it, “Once to every man and nation/Comes the moment to decide,/ In the strife of truth with falsehood,/ For the good or evil side.” The words of poet James Russell Lowell (1819-1891), written in 1845, in protest against the Mexican American War.

Turning to the psalm, psalm 82 is a powerful, imaginative depiction of God as the righteous judge holding court and giving an evaluation of the “gods” who legitimate the power of earthly “princes” and powers.  God speaks these words of judgment to the gods:

Psalm 82 is a Psalm about judgment — and judgment is a good thing, for it is none other than a call to the defenseless, the poor, the weak, the widow, to be able to stand up to one’s hecklers and say, “The Almighty who makes and redeems all things stands with me.” To believe in a God who issues judgment is nothing else than to believe in a God who takes sides against the wicked and for the vulnerable.[1]

When Jesus preaches and lives out the coming of God’s kin-dom, which is on the side of the oppressed, when we’re called to follow Jesus into that kin-dom, we need to know that it will inevitably bring division. We should expect it. Know the signs. Discern the weather. Discern the times. Human nature is prone to fight against God’s realm. But God’s realm, God’s kin-dom has come and is on the way, and we’re called to help prepare the way. And when we’re about kin-dom work there will inevitably be division, not peace.

These texts highlight a deep current running through the whole of the Hebrew Scriptures and into the New Testament, that God takes sides — not as we humans do, where we favor tribe against tribe, political party against political party, family against family. Instead, the Creator of all people takes sides against the wicked and for the vulnerable. That is the fundamental division God recognizes. And God wants us to take sides. In love, God wants us to take sides too. 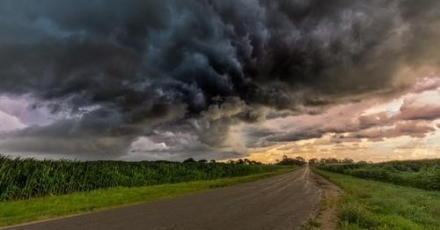