A reflection on the nature of friendship.

As we move through Eastertide the lectionary invites us to remember Jesus’ last words to his disciples, to his followers.

Love is the order of the day. The disciples have witnessed the way Jesus moved through his life with the knowledge of God’s love for him. God’s love was mediated through him in the way he loved his disciples, his followers. He wants them—wants us—to abide, remain, dwell in this same love, which will enable us to follow him, to keep his commandments, namely the commandment to love, to love one another as the Lord has loved us. This love is risky, of course, it can involve sacrifice, even suffering. That’s what love does. We have witnessed countless times this past year the sacrifices that are made, the suffering one might endure for the sake of love. Love always demands something of us. Love calls, and frees, and enables us to do the seemingly impossible, such as laying down one’s life for one’s friends.

To consider that this is the way God loves us…well, that just takes our breath away. But then Jesus says something else that is also remarkable, something we could easily overlook.  He called his disciples “my friends” (Jn. 15:14). Now that might not sound like a big deal, but it is.  It might not sound like much to us given the way we use the word or think about friendship these days.  Sometimes the word “friend” really means “acquaintance.” Consider Facebook. You might have a friend on Facebook and not really know that person very well, maybe you met them only once or twice, if at all.  I have 1,923 friends on Facebook, but my relationship with each is not the same. For many the relationship does not go that deep.

True friendship is rare, it’s a gift. We only have a handful of people we can really lean upon or call at 3 a.m.  And friendships change, of course, throughout our lives, they wax and wane.  During this year of COVID, we have probably renewed old friendships, especially the ones that mean the most to us, and some friendships might have fizzled out.  During this year of forced isolation, we are particularly aware of the absence of friends, missing friends, feeling the need to have more friends.

Aristotle (384-322 BCE), in his Nicomachean Ethics, had a lot to say about friendship. “A friend to all is a friend to none,” he said. Aristotle believed, “Friendships are essentially a partnership.” He identified three types of friendships. Ones based on utility and ones based on pleasure—these he called “accidental friendships,” they are limited, shallow, and don’t last a long time. And then there are friendships that are based on mutual appreciation of each other’s values. Friendships based on virtues build the strongest connections and last. This type of friendship is very rare.

We have no way of knowing for sure, but we can can safely assume that Jesus was familiar with Aristotle’s definitions of friendship. It is clear that Jesus certainly sees his disciples as more than “accidental friendships,” he is offering them a deep relationship, a partnership built upon mutual appreciation, built on a particular virtue, a share vision, and common task built around the command to love.  And therefore, when we hear Jesus refer to his disciples as “my friends,” we should hear this as a designation of considerable honor and respect.

When I think of friendship, I remember a beautiful scene, my favorite scene, in Antoine de Saint-Exupéry’s (1900-1944) book The Little Prince (Le Petit Prince). Often viewed as a children’s book, it was really written for adults. It’s a reflection about meaning, life, and human nature. It was published in 1943 in the U.S. and the U.K., and only later in 1945 in France. Saint-Exupéry’s writings were banned by the Vichy government. The story follows a young prince who visits various planets in space, including Earth, and addresses the themes of loneliness, friendship, love, and loss.

The scene that comes to mind is when the Little Prince meets a wild fox who is looking for a friend. It’s a beautiful exchange, too long to recount here.  The fox appears and the little prince says, “Come and play with me….I am so unhappy.” The fox replies, “I cannot play with you,…I am not tamed.”  The little prince doesn’t understand the meaning of the word “tame.” He gets frustrated and says, “I am looking for friends…. What does that mean—‘tame,’” he asks.  “It is an act too often neglected,” said the fox. “It means to establish ties.”

The English translation of “tame” has a connotation of dominance and control that is misleading. The original French, ap­privoiser, has a more loving and reciprocal meaning. When the fox asks the little prince to tame him, he is referring to a process of building friendship that unfolds with time, effort, patience, grati­tude, and love.[1] The fox says, “If you tame me, then we shall need each other. To me, you will be unique in all the world. To you, I shall be unique in all the world.” The fox says, “One only understands the things that one tames…Men have no more time to understand anything. They buy things already made at the shops. But there is no shop anywhere where one can buy friendship, and so men have no friends any more.  If you want a friend, tame me…” “What must I do, to tame you?” asks the little prince. “You must be very patient,” replied the fox. “First you will sit down at a little distance from me—like that—in the grass.  I shall look at you out of the corner of my eye, and you will say nothing. Words are the source of misunderstandings. But you will sit a little closer to me, every day….”[2] Side-by-side, closer every day, looking forward yet conscious of the other’s presence at one’s side. Companions. Tamed. Friends.

C.S. Lewis (1898-1963) talked about friendship in a similar way, although I have no idea whether he ever read The Little Prince. In Lewis’ classic text The Four Loves, published in 1960, he says, “True friends don’t spend time gazing into each other’s eyes. They may show great tenderness towards each other, but they face in the same direction—toward common projects, goals—above all, towards a common Lord.” Lewis said, “What draws people to be friends is that they see the same truth. They share it, ….” Friends stand shoulder to shoulder, side by side, “their eyes look ahead.”[3]

Facing in the same direction. I love that image.  But with all due respect to Mr. Lewis, I think it’s more like this: Showing great tenderness toward one another, we stand with one another. Not facing a common Lord, however, we stand with a common Lord. We stand with the Lord, standing together with him as friend, facing the same direction: the way of love. Partners in God’s mission to love the world, co-creators, called to “bear fruit, fruit that will last” (Jn. 15:16). What a beautiful image for the church. 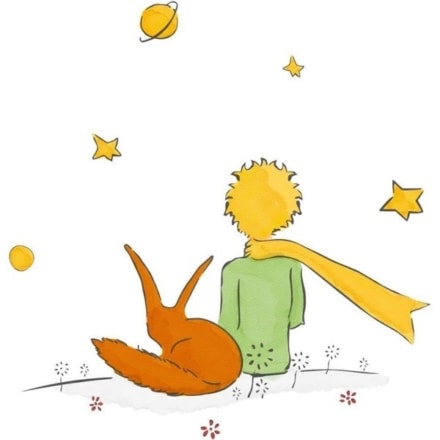 Saint-Exupéry’s illustration from The Little Prince.

[2] Antoine de Saint-Exupéry, The Little Prince (Mariner Books, 2000). The full text of the exchange with the fox (chapter 21) may be found here: https://www.angelfire.com/hi/littleprince/framechapter21.html.